From time to time, David Hancock fills us in on what’s been going on at the Hancock Wildlife Foundation:

Hancock here: French Creek eagles are flying!
Feb 25, 2022 Hancock here: French Creek eagles are flying! Some of you will remember back to pre-covid times, that HWF had installed a new bald eagle nest and a CAM at the French Creek estuary. This had been sponsored by the local landowner. In reviewing the site I had ...
Read More
Hancock Here: Marvelous new documentary on the Salish Sea by Bob Turner
Subject: My new movie "The Salish Sea - A Single Body of Life" - Hello everybody! If you understood that the Salish Sea might function like a tree, a single living organism, would you appreciate the Salish Sea more? That question is the idea behind my new movie “The Salish ...
Read More
A Specific Challenge
A specific challenge, question or dilemma faces me. After 65 years of describing one behaviour one way, I believe I have had an aha moment, all of a sudden seeing something in a different light. A few observations are, I believe, now backed up by a proof from our cams ...
Read More
Hancock here: British Columbia’s most productive lake is back – briefly!
David Hancock, Ecologist Nov 21, 2021  - British Columbia is in the midst of tragedy upon tragedy upon tragedy -- everywhere -- drought, forest fires and now floods. So many, many people have suffered but also there is tragedy for thousands of other mammals, hundreds of thousands of birds and ...
Read More
Hancock Here: Where have all the eagles gone? Long time coming!!! Nov 1, 2021
Hancock here: That is the extent of my musical talents and be thankful you did not hear me sing this! However, I do keep hearing that during the past 10 days that the eagles have disappeared from the lower mainland – at least the early arrivals at the lower valley ...
Read More 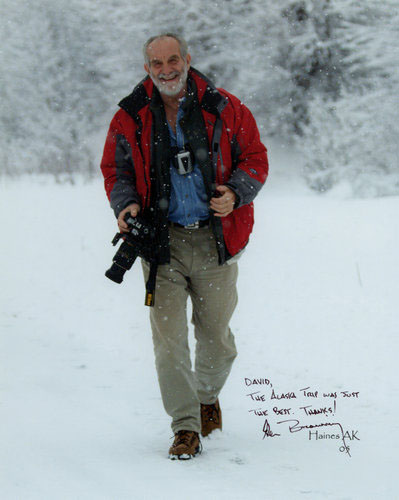 Biologist, conservationist, writer, publisher, and lecturer, David Hancock has spent most of his life studying west coast and arctic wildlife. He has published scientific and popular papers on whales, seals, seabirds, grouse, and his specialty, the northern raptors. Prior to starting Hancock House Publishers, David was a pilot and wildlife film producer and produced films on these subjects as well as the Haida and other northern Native cultures. His books include The Bald Eagles of Alaska, BC and Washington, Rocky Mountain Wildlife, and The Tlingit:Their Art & Culture
David received worldwide acclaim given to the Live Bald Eagle Video Cam which he pioneered streaming on the Internet. His current study on The Urban Bald Eagle of Vancouver BC has turned up over 360 nesting pairs in the greater Vancouver area.

David Hancock is an enthusiastic and dynamic lecturer and has a fine collection of slides to illustrate a number of themes. His studies and travels have taken him to all continents of the world, and he frequently addresses conservation societies on the conservation and creation of better bald eagle habitat, the turacos of the world, the grouse of the world, arctic adventures and an African photo safari — just a few of his pet topics.

David does not charge for his lectures to conservation or educational groups but does require travel cost reimbursement and readily accepts an honorarium to the Hancock Wildlife Foundation for more CAM or eagle research.

David’s favorite power point presentations are on the “Success and Challenges for Bald Eagles”, various conservation issues or the role of Live Wildlife CAMs in Science and Education.

David is also available for consultation on getting bald eagles to nest in your area OR on your property.

As a publisher/writer/photographer for over 40 years he is also called upon to lecture on the publishing industry, getting published, non-fiction writing, and photojournalism.