The Mosquito Creek pair that had their nest removed by Concert Developments right at the North Shore, and who already has just fledged two young in the new nest we built them, is now jumping our expectations by exploring their future nest. 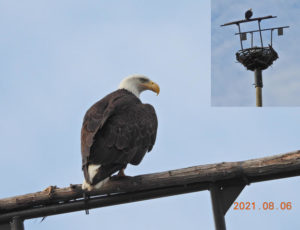 Some of you will recall that Concert Developments have been a model of environmental excellence.  They had a huge development that needed the only nesting pair of eagles in the region to be relocated.  At first, there did not appear to be any acceptable trees left so we suggested that they foot the bill to install a pole and nest in the inter-tidal zone at the mouth of Mosquito Creek.  This was an expensive option but the only way we predicted in keeping the breeding pair if they were not allowed to nest in one of the big trees of Mosquito Creek just above Bewicke Avenue.  Well, after Concert agreed to build the pole nest it was decided that one of the corners of the development area might be just inside the ‘don’t disturb zone of an active nest.’  So a new challenge arose.  The City of North Vancouver initially would not allow my suggested tree on the creek to have a nest installed — they had planned to remove that tree for another development in a few years.  So now what?  The inter-tidal pole and nest was too close to possible developments and the City would not allow the use of the Mosquito Creek tree!  Well common sense prevailed.  A compromise was reached.

We were allowed to build the eagles a nest in the preferred Mosquito Creek cottonwood tree — but they could only allow this for 3 years.  After three years this tree had to be removed — and if we built a nest it had to be temporary.  We agreed to this on the basis that they first installed the inter-tidal nest.  This was done, the next week we built a fine tree nest in the huge cottonwood on Mosquito Creek.  Two days later the original nest was cut down!!!!

Well the Fish and Wildlife Branches’ faith in our recommendation paid off.  On the second day after the pair returned from migration, they started to put the finishing touches to our Mosquito Creek cottonwood tree nest as hoped.  The community had a great time watching the two chicks grow and fledge.

Now another wonderful event.  The adults have taken to using our pole and nest as hunting perches. We had hoped this would happen, but nobody saw or caught this on image until this week.  Hopefully this will condition them to using this nest in two more years as the active nest. 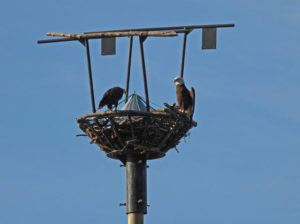 While they are away on migration after the third year in the cottonwood tree nest, we will remove the cone presently covering up the nesting site in the pole nest so the pair can establish their nest.  Another wonderful step forward.